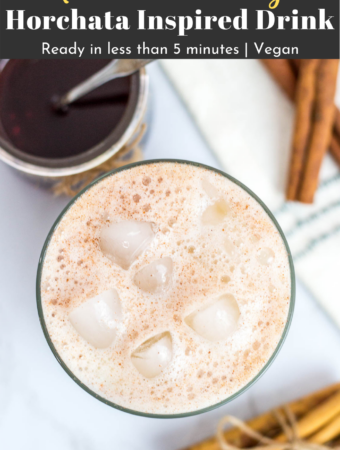 Quick nondairy horchata-inspired drink - Deliciously sweet, creamy, cinnamon-flavored drink ready in 5 minutes or less! You can easily customize the sweetness and creaminess of the drink. Vegan-friendly!

Right before I came to America, there was a rice-based drink called 아침햇살 that has just come out on the market. I loved the nutty and mildly sweet flavor of the drink.

Fast forward ten plus years, I came across a drink called "horchata". And it reminded me of the Korean drink with the added cinnamon flavor! As much as I enjoyed the flavor, the added milk in the drink didn't agree with my lactose intolerance.

Traditionally, horchata is dairy-free. However, many places use cow milk to achieve creamy texture without soaking, blending and straining the rice (Article from Los Angeles Times - "Stop putting dairy in your horchata").

But recently, I had a strong craving for horchata and decided to make my own non-dairy version. Unfortunately, all the recipes I found require hours of soaking rice. And I didn't want to wait that long and this is how the recipe was born!

I would never claim this drink to be authentic horchata. In fact, developing this recipe was a perfect opportunity for me to learn more about this tasty drink!

History and Origin of Horchata

While I was researching the history and origin of Horchata, I came across an excellent article (written by Maite Gomez-Rejon). According to this article and Wikipedia, horchata stemmed from the word, Hordeum (barley). The ancient Roman boil barley in water and drink it during summer (due to its cooling property) for medicinal purposes.

As the drink was introduced to Europe and eventually Latin America, this medicinal drink became a well-loved refreshment made with different nuts, grains, seeds, and herbs.

Many different types of Horchata

This quick nondairy version has the most similar flavor profile as horchata de arroz.

This is my "cheater's" way of making horchata de arroz, a non-dairy version! Hope you give my quick horchata-inspired drink a chance!

Deliciously sweet, creamy, cinnamon-flavored drink ready in 5 minutes or less! You can easily customize the sweetness and creaminess of the drink. Vegan-friendly