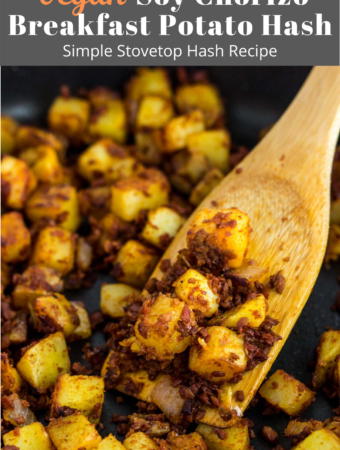 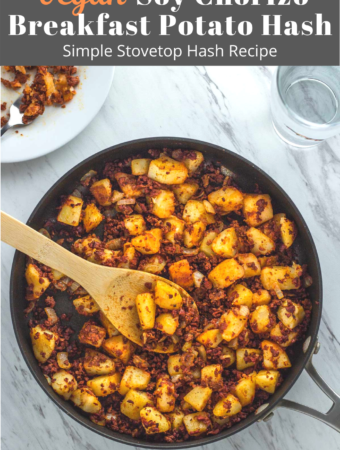 I LOVE savory breakfast. In fact, I'd take a savory breakfast over a sweet one any day! So it's a no brainer why I love this spicy hash that's creamy inside and crispy outside. Before we get to the recipe part, let's talk about chorizo.

Chorizo is chopped or ground pork sausage that's liberally seasoned with different spices in Mexican and Spanish cuisine. So there are mainly two different types of chorizo: Mexican chorizo and Spanish chorizo.

What is vegan chorizo?

I believe all the vegan chorizo in the market currently (as of 2019) are Mexcian style chorizo. The main ingredient is usually soy protein or vital wheat gluten. Vegan chorizo uses the same spices as the meat chorizo to mimic the flavor.

My personal favorite vegan chorizo is the Soy Chorizo from Trader Joe's. It is spicy, flavorful, and the texture is similar to meat chorizo. But honestly, its big bold complex flavor is better than some of the meat chorizo I've had before!

The short answer is NO. Vegan chorizo is a highly processed product with a high level of sodium (A little less than a quarter of the vegan chorizo from Trader Joe's has a 30% daily sodium level). Yes, it has fewer calories and fat than meat chorizo and contains some fiber but I wouldn't exactly place vegan chorizo as a healthy food category.

But like all good things, moderation is key. Because vegan chorizo is already heavily seasoned, I was mindful not to use additional salt (except to boil the potato but you may skip this step) to make the hash.

Now that we covered vegan chorizo, let's talk about the potato.

What type of potato should I use for breakfast hash?

Technically, you can use any potato you want to use. But I recommend Yukon Gold Potato.

If you are looking for a sweet and savory combination, you can use sweet potato or even winter squash like butternut, acorn, and delicata squash.

How to cook potato for the breakfast hash

If you were to make breakfast hash using raw potato, you will end up using quite a bit of oil. Because you will have to keep adding oil as the potato cooks and to avoid them from burning. The trick to this situation is boiling the potato first before you fry them.

I know it is an extra step but it is a worthy one. You don't feel like cutting up a potato into ½ inch size? Cut up potato in a larger size and just boil the potato a little longer until they are cooked. Problem solved, ta-da!!

Since the potato grows underground, I place the potato in the pot, cover them with cold water, and bring them to a boil.

What to serve with vegan soy chorizo potato hash

For vegetarian and omnivore 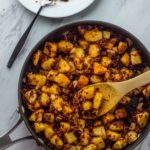