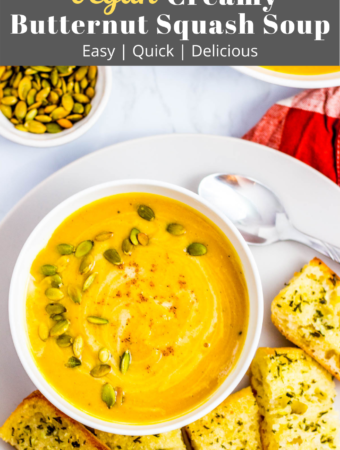 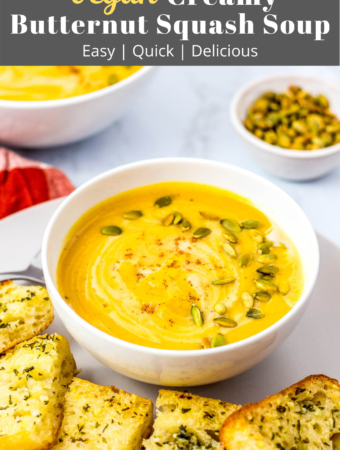 It is fall! The weather here in LA doesn't feel like fall (it is still pretty summery) but I can tell it is fall by certain items in the grocery store. The pumpkin spice in the spice section, pumpkin puree in the canned good section, pumpkin spiced latte flavor coffee creamer in the refrigerated section, and all different sorts of pumpkins and squashes in the produce section told me fall has arrived.

When I think of fall food, a couple of things pop up in my head. One is some sort of baked good. Like pies, quick bread (such as pumpkin bread), scones, and muffins. The other thing is soup!

Soup is comforting, warm, and nice. I'd be perfectly content with eating a big bowl of soup as a meal. My husband, on the other hand, would like the soup to be served as an appetizer or at least with a small sandwich. So I served this soup with some homemade garlic bread.

How to make the butternut squash soup vegan

I used to make something very similar using heavy cream and a half and half. But this vegan version of my soup uses oat milk. I know coconut milk can also be very thick and creamy but it does have a very distinctive flavor profile. Oat milk, on the other hand, has the texture of milk with a very mild flavor which makes it a perfect alternative to milk.

People recognize the arrival of fall differently. It may be the chilly air in the morning, colorful leaves on the tree, or by different items displayed at the grocery store. No matter how you celebrate the beginning of fall, I think my creamy vegan butternut squash soup deserves a spot on your cozy fall dinner table.

Would you like more recipes with butternut squash/winter squash?