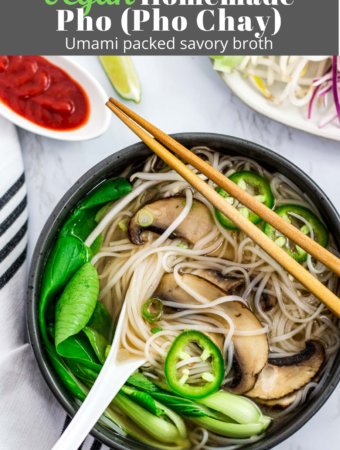 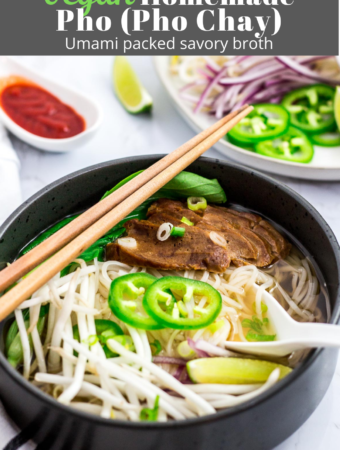 Homemade Pho Chay (Vegan Pho) Recipe - Imagine slurping on noodles immersed in an umami-packed savory broth that's flavored with warm spices! This bowl of noodles will keep you warm and full during the cold season!

I personally LOVE pho. It's one of my favorite dishes but once I became a vegetarian, I couldn't be more disappointed in vegan and vegetarian pho at the restaurants. They were bland and unsatisfying. Then I came across the vegan pho recipe by Viet Vegan. It was so much better than all the vegan pho I had at the restaurants. Since the discovery of her recipe, I've tweaked the recipe to make my own. So this pho chay recipe is adapted from her recipe.

Pho is a Vietnamese noodle soup dish consist of broth and rice noodles topped with meat, herbs, and vegetables.

What does "Chay" mean?

According to Intrepid Travel, "Chay" means you eat foods (vegetarian food) that the Vietnamese Buddhists eat. So if you find Vietnamese food with "Chay" in their name, it is safe to assume it's vegetarian-friendly!

How to make the broth for Pho Chay (Vegan Pho)

The flavor of the broth is the star of the dish. I used to think the flavor comes from the bones and meat. And I learned that it actually comes from the vegetable and spices!

As the daikon, onion, and giant green onion cooks, it sweetens the broth without adding sugar. These ingredients are often used in many Korean soup dishes to enhance sweetness and savoriness. The dried shiitake mushroom and bay leaves make the broth savory without using the meat. And all the warming spices perfume the broth with the signature pho fragrance that we all love.

Noodles for the pho

How to customize your vegan pho (condiments and toppings)

Looking for a tasty appetizer to go with Pho Chay dinner?

Homemade Pho Chay (Vegan Pho) - Imagine slurping on noodles immersed in an umami-packed savory broth that's flavored with warm spices! This bowl of noodles will keep you warm and full during the cold season!