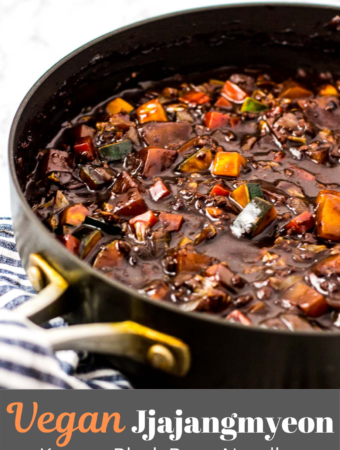 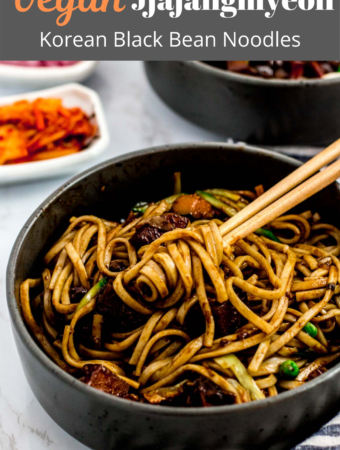 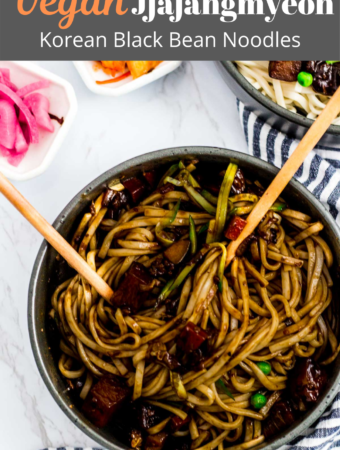 Jjajangmyeon has a couple of different names. It is called "Jajangmyeon (with only one consonant of J)" or "Korean Black noodles". I'm here to tell you that they all are correct names for this dish.

In America, you often eat pizza on your moving day due to its convenience. For the same reason, you'd order Jjajangmyeon in Korea. It is probably the most delivered food in Korea.

Jajjangmyeon is a Chinese style-Korean noodle dish that's also known as Korean black bean noodles because of its signature black bean sauce (Jjajang). It is a dish with sweet, savory, and velvety sauce with lots of vegetables that is served over a bowl of noodles.

I don't think there is any food in America that has a similar taste profile as Jjjangmyeon. The flavor comes from Jjajang sauce (black bean sauce). The sauce is sweet, salty, very umami front flavor with a hint of pleasant bitterness.

But I'd say the major flavor you will notice at first would be sweet, salty, and savory. Because of its sweet taste profile, it is one of the most popular dishes among Korean children.

Traditional Jajangmyeon is NOT vegan. It is often made with pork. The pork meat (usually the fatty part) is cooked to render the fat and the vegetables and chunjang are fried in the pork fat. So the traditional jjajangmyeon is not halal.

How to make Vegan Jajangmyeon

The good news is other than the pork in the traditional recipe, everything else is vegan friendly. This dish has a bountiful amount of vegetables like onion, carrot, zucchini, cabbage, and potato.

Instead of using pork, I'm using plant-based ground meat in this recipe. By not using pork, this dish is not only vegan-friendly but also halal-friendly!

Traditional Jjajangmyeon is NOT vegan. Often, jjajangmyeon has pork or seafood but chunjang itself is vegan friendly.

Chunjang is a salty fermented soybean paste that is colored with caramel. It is bitter, very salty, and has a note of umami. To get rid of the bitterness of the chunjang, it is often fried in oil. Once fried in oil for a while, it develops a deeper umami flavor with a mellow hint of bitterness.

Most Korean chunjang we buy at the stores are already fried in oil. But it won't hurt to fry chunjang again to make the dish. This process will only make your dish jam-packed with savoriness.

You can purchase Chunjang in most Asian grocery stores but you can also order them online.

Other pork/meat substitution for vegan jjajangmyeon

Noodles for the Vegan Jjajangmyeon:

Although all the flavor of vegan jjajangmyeon comes from the black bean sauce, you need a vehicle to transport the yummy sauce into your stomach. And Korean serve this sauce over noodles.

Myeon (면) means noodles. Noodles used in this dish are usually thicker than ramen noodles. The traditional noodles are made with only flour, salt, and water so they are vegan friendly. You can easily find fresh noodles at your local Asian grocery store in the refrigerated section. But if you don't have access to these stores, you can substitute for udon noodles (dried, fresh, and frozen will all work).

Not a fan of noodles? No worries! You can serve the vegan jjajang sauce over rice as well. Korean calls it Jjajangbap 짜장밥 ( Jjjajang is the black bean sauce and bap means rice).

In Korea, we have a day dedicated to eating this noodle dish. It's called "Black Day" (not to be confused with Black Friday).

But what if you are not currently dating anyone or don't have a romantic partner? Well, that's what the Black day is for. People who didn't get to participate in either Valentine's day and White day eat Jjajangmyeon to console their loneliness. Because Jjajangmyeon is black, Korean call it "Black day"!

I don't know about you but regardless of celebrating Valentine's day, I will always be down to eat a big bowl of vegan Jjajangmyeon!