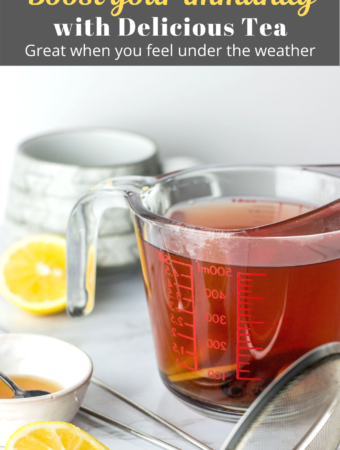 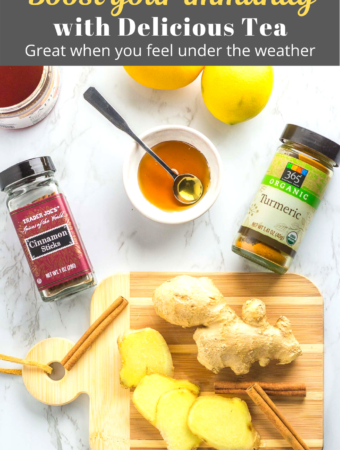 Immune boosting tea against cold/flu - cold-fighting tea made with immune-boosting ingredients like ginger, cinnamon, turmeric, lemon, and honey. This tea will help you get over your cold/flu in no time! Works every time!

Winter is here... I don't know about you but I'm not particularly a big fan of winter. It's cold, windy, grey, and depressing. In addition to these unattractive characteristics of winter, it also is a season of cold/flu.

This tea was a winter staple in my house growing up. My mom would make a big batch of tea during winter and my sister and I had to drink up whether we have a cold or not. So this actually is my mom's recipe. The only small change I made was to add some turmeric powder.

What are the ingredients for my immune boosting tea?

Do you see the common theme here? Every single ingredient is anti-inflammatory and high in antioxidants. Such a great boost can support your immune system and help you recover quickly.

Tips on preparing the tea:

A week ago, I caught a pretty nasty cold. My throat was hurting, my voice was gone, lingering headache, sneezing, coughing, nasal congestion but my nose was constantly runny, and felt very tired and weak in general. So what did I do?

After just two days and a half of doing things I described above, I was able to achieve a quick recovery.

I am not saying my tea will guarantee a quick recovery from cold/flu (although it always has worked wonders for me). Everyone is different. Their immune overall health condition can play important role in cold/flu recovery. What I know is that my tea can help support your immune system to fight the illness and provide some relief to your symptoms. But you don't have to be sick to enjoy this tea. This tea certainly can be used as a preventative measure!

Immune-boosting tea for cold and flu 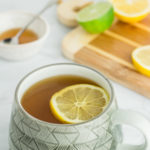 Immune boosting tea against cold/flu - cold-fighting tea made with immune-boosting ingredients like ginger, cinnamon, turmeric, lemon, and honey. This tea will help you get over your cold/flu in no time! Works every time!