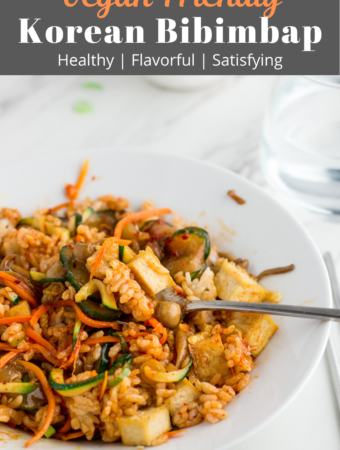 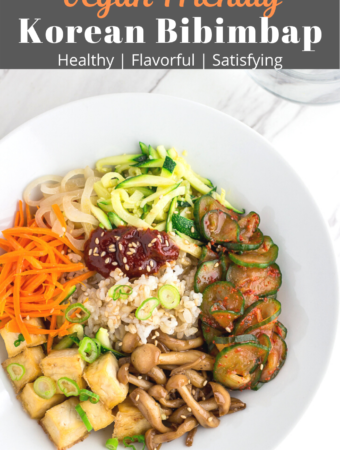 How to make Korean Vegan Bibimbap - A bowl of rice with tons of vegetables with sweet and spicy Gochujang sauce equals a healthy tasty meal! Learn how to make this delicious vegan bibimbap at home!

I feel like Korean bibimbap is the true OG of the Buddha bowl. I just didn't realize I've been eating Buddha bowl all my life before it became all popular and hip!

Bibimbap 비빔밥 (pronounced BEE-BEAM-BOB) is a traditional Korean dish that is very popular among Koreans as well as foreigners. It is a rice dish served with a variety of vegetables, meat, and a fried egg on top with a drizzle of gochujang sauce. This dish is often NOT vegetarian and vegan-friendly but it is extremely easy to make it into one.

Bibimbap started to appear in various records in Korean since the 16th century but the exact origin of the dish is unclear. However there are a couple of theories.

The first theory is that Bibimbap was invented to enjoy the leftovers after Korean major holidays (such as Lunar New Year and Korean Thanksgiving) and ancestral memorial ceremonies. Many dishes prepared during these occasions overlap with the main ingredients in Bibimbap.

The second theory is that it was invented during the potluck. Bibimbap often has many different dishes and people speculate that people came up with the idea of bibimbap to enjoy various side dishes at once.

There are many different types of bibimbap in Korea. The types can depend on its region in Korea, ingredients, and how it is served (serveware).

How to make Korean Vegan Bibimbap

Since I'm making mine vegan-friendly, I'm skipping the beef and fried egg. Instead of beef, I'm cooking my mushroom in traditional bulgogi marinade to mimic the similar flavor.

Although baby fern and bellflower root are typical ingredients in traditional bibimbap, they are not easy to find unless you make a trip to a Korean grocery store. So I made my own (vegan) version of bibimbap with more common ingredients.

Please don't let the long ingredients and instructions scare you. I promise you the cooking instructions are very simple and easy to follow.

Customization according to diet 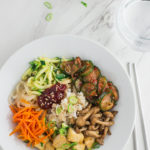 How to make Korean Vegan Bibimbap - Rice with tons of veggies topped with sweet and spicy Gochujang sauce equals a healthy tasty meal!