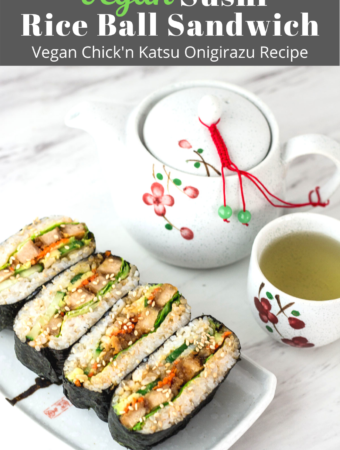 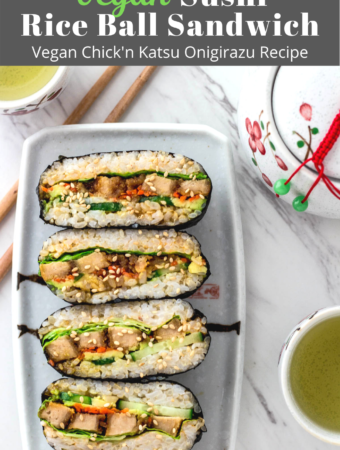 Making this amazing vegan sushi rice ball sandwich (vegan onigirazu) is easier than you think. This is a vegan version of the chicken katsu onigirazu recipe!

Who doesn't like sushi? I honestly can't think of anyone who is not a sushi fan. Personally, I am a HUGE sushi fan. I grew up in Korea and I had my fair share of fresh seafood. When I became a vegetarian, I thought I'd miss meat like crazy but I actually struggle more with seafood. Of all the deliciousness from the sea, I'd say sushi is probably what I miss the most.

But I am on a mission here to take better care of my mental and physical health and I made a conscious choice to become a vegetarian. So what a girl do? Vegan-ify or vegetarian-ify the sushi I used to love! That's right, I'm going to share a vegan sushi rice ball sandwich (vegan onigirazu) recipe that will rock your world today!

First thing first, what is sushi? Sushi is not a piece of raw fish or the rolls that you order for your dinner. Sushi actually means 'vinegar/sour rice.' So by definition, sushi is VEGAN! Whaaaat???!!!

I think many people are intimidated to make sushi at home without realizing that it's pretty easy to make. Especially this sushi rice ball sandwich, also known as onigirazu, is simple to make.

How to build the sushi sandwich:

Ta-da!!! DONE! See, it's not hard at all. The pictures above are how I piled the ingredients but honestly, the order does not matter. As long as the first and the last thing is rice, you are good to go.

You don't have to be a vegetarian or a vegan to enjoy my vegan sushi rice ball sandwich (vegan onigirazu). This vegan onigirazu can make a debut on your next meatless Monday. And if you are a vegan or vegetarian, guess what? You can still enjoy sushi! That's right! I promise you that I'm not done inventing more vegan and vegetarian sushi recipes. They are coming! But until then, satisfy your sushi craving with my vegan onigirazu! 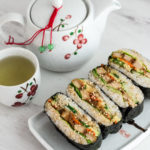