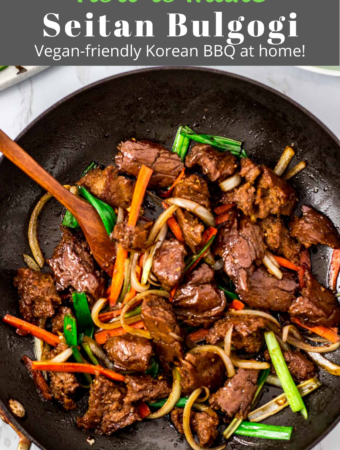 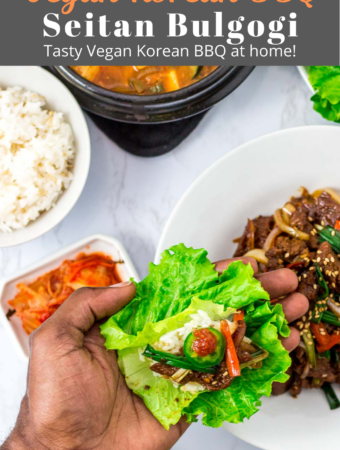 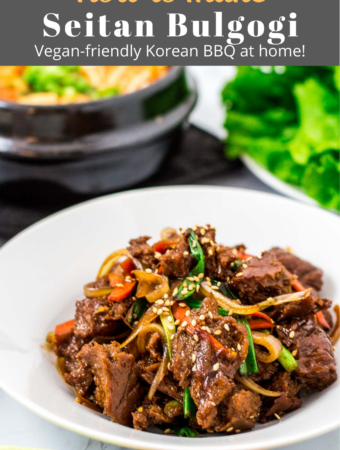 First thing first, What is Bulgogi?

Bulgogi 불고기 is a very popular Korean dish. "Bul불" means fire and "Gogi고기" means meat in Korean. So technically, if you cook your meat on the fire, you can call it bulgogi.

But the most well-known type of bulgogi is the dish with thinly sliced beef (usually, ribeye or sirloin) marinated in soy sauce. Today, I will be using homemade seitan to recreate this dish.

It is sweet, salty, savory, umami-rich, and meaty dish.

Bulgogi is extremely popular in Korea and it is often one of the dishes that you serve during major holidays like Seol 설 (Korean/Chinese New Year) or Chuseok 추석 (Korean Thanksgiving) in Korea.

Because of its sweet and savory sauce, bulgogi is very popular among children. So what makes bulgogi popular is in the sauce, in my opinion.

How to make bulgogi sauce

There are 4 major ingredients that make bulgogi sauce what it is.

How to make Vegan Seitan Bulgogi

My vegan (beef-less) seitan bulgogi is easier and quicker to make than that of a traditional one. There is no need to marinate the meat so it's quicker but without no flavor compromise!

What else can be used in place of vegan beef-flavored seitan?

You can use your favorite store-bought seitan or soy curl. If you are not a big fan of mock-meat or meat substitute, you can also use tofu or mushroom.

What to serve with Vegan Seitan Bulgogi (Vegan-friendly Korean BBQ)

How to make Vegan Bulgogi with Seitan