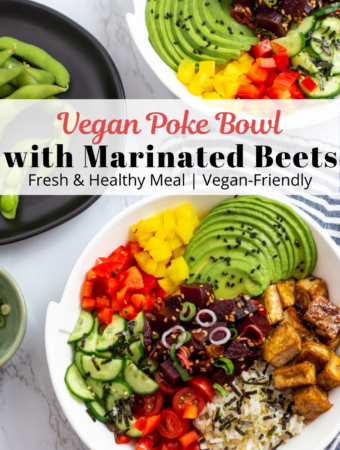 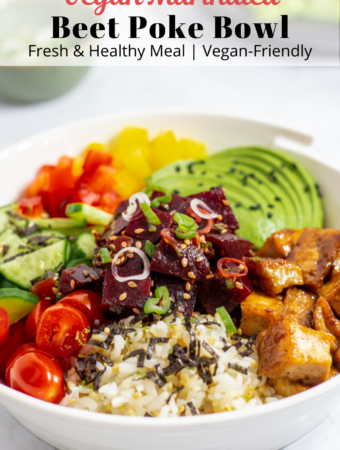 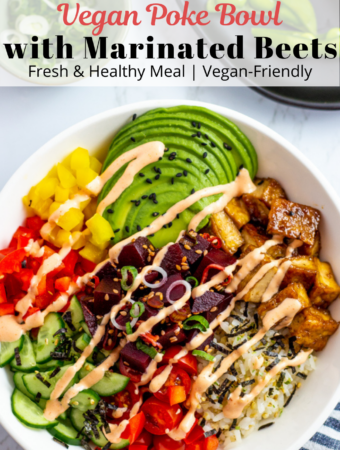 I know I'm not the only one craving something refreshing and light during warm weather! I am sharing a very easy, healthy, and refreshing vegan poke bowl with marinated beets today. Doesn't deep ruby red cubes of beet look like tuna? I don't know about you, but it almost fooled me! Shall we get started?

Poke (pronounced Poh-Keh) bowl is a dish in native Hawaiian cuisine and the literal translation is "to dice and cut" raw chunk of meat. Usually poke has raw Ahi tuna or cured octopus but as it became popular, people started to use other ingredients to make poke bowl.

So the traditional poke bowl is NOT vegan-friendly but I'm using cooked diced beets to have a very similar appearance to Ahi tuna to make poke bowl.

How is Poke different from Sushi and Ceviche?

The rice in the Poke bowl is NOT seasoned. However, the rice in sushi is seasoned with vinegar, sugar, and salt. And the main difference between poke and ceviche is in the marinade. Ceviche uses some sort of citrus juice to partially "cook" the meat/seafood where poke uses soy sauce, sesame oil, and onion for its marinade.

How to marinated beets for the poke bowl

As mentioned above, the conventional way of marinating seafood in poke uses soy sauce, sesame oil, and green onion. However, I'm using sesame seeds instead of sesame oil in addition to mirin in my marinade.

Mirin is a Japanese cooking wine that has higher sugar content with lower alcohol content than sake. The sweetness of the Mirin helps tame down the earthy flavor of beets. And I found that using sesame oil tends to coat the beets and takes a long time to marinate. So I use sesame seeds instead to maintain the flavor without potentially marinating the beets for a longer period.

How to assemble poke bowl

There are 4 components to making a great poke bowl:

We all eat with our eyes first so I highly recommend using colorful ingredients to elevate your poke bowl to the next level.

How to prep ahead and store

What to serve with

Beets for the poke bowl

For the poke bowl